mousemusings...multimedia, music, progressive politics, video, web design and general rants
Human beings will be happier - not when they cure cancer or get to Mars or eliminate racial prejudice or flush Lake Erie but when they find ways to inhabit primitive communities again. That's my utopia.
~Kurt Vonnegut
Saturday, February 11, 2006
Zoo tempts gay penguins to go straight 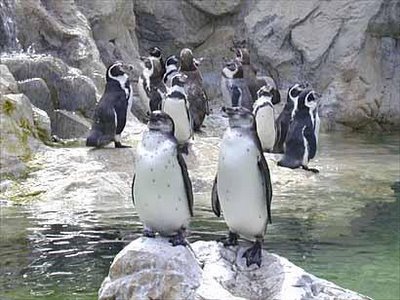 A German zoo has imported four female penguins from Sweden in an effort to tempt its gay penguins to go straight.

The four Swedish females were dispatched to the Bremerhaven Zoo in Bremen after it was found that three of the zoo's five penguin pairs were homosexual.

Keepers at the zoo ordered DNA tests to be carried out on the penguins after they had been mating for years without producing any chicks.

It was only then they realised that six of the birds were living in homosexual partnerships.

Director Heike Kueck said that the zoo hoped to see some baby penguins in the coming months.

She said that the birds had been mating for years and one couple even adopted a stone that they protected like an egg.

Kueck said that the project has the support of the European Endangered Species Programme because the penguins, which are native to South America, are an endangered species. [...]

At first, this seemed like some kind of nutty homophomic scheme, but it sounds as though they really are trying to increase the world's population of this particular species (which, they mention, is an endagered species.) It does seem kind of meddlesome, though.