mousemusings...multimedia, music, progressive politics, video, web design and general rants
Human beings will be happier - not when they cure cancer or get to Mars or eliminate racial prejudice or flush Lake Erie but when they find ways to inhabit primitive communities again. That's my utopia.
~Kurt Vonnegut
Saturday, December 03, 2005
About The Human Mirror

This is from an article in the Wahington Post:

[...] At the black console on the second floor of the American Visionary Art Museum, he tries to align his face with a grid that stares back at him from behind the glass-enclosed front of the machine, which looks like a minimalist version of a mall photo booth.

He clicks a mouse and a screen shows a grainy black-and-white picture of the 30-year-old student, who has olive skin, a long, rounded nose, large eyes and a full mouth.

Within seconds, the machine morphs his image, projecting color photos of how Hawthorne, who considers himself white, would look if he were Asian, black, Hispanic, East Indian and Middle Eastern. Hawthorne, a fine-arts major at Shepherd University in Shepherdstown, W.Va., says he sees a bit of himself in each picture.

That's exactly what SoHo artist Nancy Burson was going for. [...]

The machine, the artist said, is based on one philosophy: that the similarities between people of various races far outweigh the differences. To Burson, who is white, there aren't different races, just one -- the human race, she said. The best way to show that, she thought, would be to give people the chance to manipulate their ethnicity and see themselves differently, even if only momentarily. [...]

"Somebody [recently] said to me, 'There's no gene for race.' And I said: 'What? Why don't we know that? Why isn't this information out there?' I thought the information was so huge and I still do, and I don't think people understand that." [...]

It is true: there is no gene for race, and no definable set of genes, either. Race is a social construct, not a biological one. It is an important concept for people to understand.

In my perpetually-sophomoric opinion, art is not about creating beauty. The world has lots of beautiful things already. If you want more beuatiful things, go plant some flowers or something. It does not take an artist to do that.

UPDATE: Science Fiction is like art. It influences people to ask questions, even if it is not "good literature."

UPDATE #2: Do not fear art; nor fear the questions: 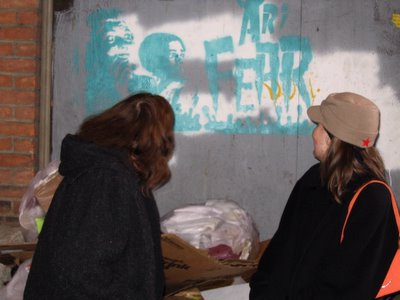