mousemusings...multimedia, music, progressive politics, video, web design and general rants
Human beings will be happier - not when they cure cancer or get to Mars or eliminate racial prejudice or flush Lake Erie but when they find ways to inhabit primitive communities again. That's my utopia.
~Kurt Vonnegut
Tuesday, August 23, 2005
Congratulations to Dennis Kucinich and Elizabeth Harper 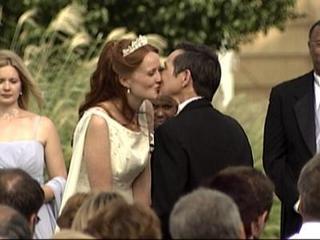 The next time Rep. Dennis Kucinich runs for office, the Democrat won't be able to celebrate bachelorhood.

Kucinich, who's single status made headlines during his long-shot 2004 presidential campaign, married Elizabeth Harper on Sunday before about 250 guests outside City Hall, where he once worked as mayor.

"It was a lovely ceremony, and the congressman really wanted to do this in the heart of Cleveland," said his spokesman, Doug Gordon. [ more photos here ]

I like the image I have of her as First Lady.
UPDATE: Get to know more about Elizabeth Harper Kucinich through 3 video interviews with her. Imagine her as first lady. I think you'll also like the image. posted by Cyndy | link | | |
Home