mousemusings...multimedia, music, progressive politics, video, web design and general rants
Human beings will be happier - not when they cure cancer or get to Mars or eliminate racial prejudice or flush Lake Erie but when they find ways to inhabit primitive communities again. That's my utopia.
~Kurt Vonnegut
Saturday, July 09, 2005
Emotions, Men and Women 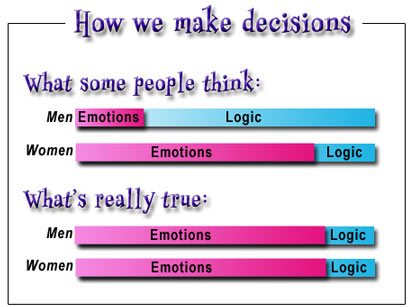 What a great post by Kathy Sierra at Creating Passionate Users! The book The Emotional Brain is now on my wish list. I have been struggling with a tough decision myself and I finally had to make it based purely on feelings in my body, right or wrong. I was kicking myself for being overly emotional and I still don't know that my decision was the 'right' decision', but ultimately, unless things had changed drastically, the decision would have had to be the same because I wouldn't have been able to stand it physically otherwise. it's nice to know men actually deal with the same decision processes whether they know it or not.

True, we women often show it differently... and certainly more freely than the average male. We don't have as much to prove there, and we always knew that emotions would one day gain the street cred they so richly deserve.

We've just been waiting for the neuroscience to catch up.

...) Sooner or later, guys, you'll have to learn to cope with the knowledge that you're not nearly as rational as you thought. But I bet if you look back at the last big purchase you made, you'll know in your heart of hearts that no matter how good it looked on paper... you bought it because of how it made you feel. Deal with it. : )