mousemusings...multimedia, music, progressive politics, video, web design and general rants
Human beings will be happier - not when they cure cancer or get to Mars or eliminate racial prejudice or flush Lake Erie but when they find ways to inhabit primitive communities again. That's my utopia.
~Kurt Vonnegut
Monday, July 11, 2005
Chaco Canyon 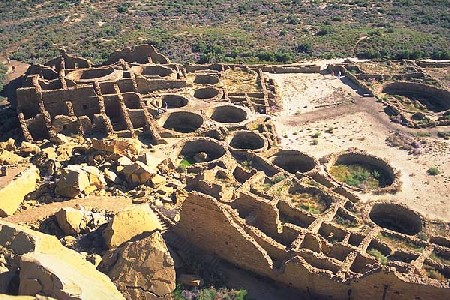 Radiating out from the Chaco complex are an enigmatic series of straight lines that extend ten to twenty miles into the desert. Conventional archaeological theories explain these lines as roads leading to outlying settlements, but this seems highly unlikely as the lines are arrow straight regardless of terrain. They go over mesas (table-top mountains), up and down vertical cliff faces, and along ways that make them utterly impractical for use by the casual or commercial traveler. Perhaps they had another purpose. Paul Devereux, the British scholar and leading writer in the so called "Earth Mysteries" field has suggested that these lines (and others he has studied around the world) are better understood as markings that represent the out-of-body spirit travel of ancient native shamans. Archaeological research does indeed indicate that the lines often lead to small shrine-like structures where evidence of religious and shamanistic activity is common. posted by Cyndy | link | | |
Home