mousemusings...multimedia, music, progressive politics, video, web design and general rants
Human beings will be happier - not when they cure cancer or get to Mars or eliminate racial prejudice or flush Lake Erie but when they find ways to inhabit primitive communities again. That's my utopia.
~Kurt Vonnegut
Wednesday, October 22, 2003

Many progressives are praising Dennis Kucinich for saying all the right things -- and then they're backing other Democrats.
The leaves are changing. Apple cider is simmering and minds are emerging from vacation. Through Notes on the Atrocities I found A Class Act written by Jeanne d'Arc of Body and Soul who considers her support. Reading the comments to her pondering, other encouraging emergences of support are revealed.

Morgaine of The-Goddess writes in the comments: "I defected from the Dean camp to the Kucinich campaign about a week ago, and I'm not looking back. I just can't convince myself to give my vote to my second choice.

The more I find out about him, the more I realize he's the candidate I really want. He'll get my vote in the primary, then I'll stand behind whichever Dem wins against Bush.

The picture, I was compelled to upload, also from Body and Soul shows the passion of this man. There is no doubt who he is. We know exactly what he will fight for, and we know he will fight. 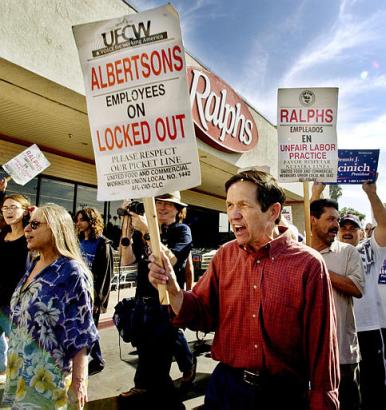 Put your vote where your heart is.

David Moberg writes, "It's fair to say progressives haven't consolidated around Dennis,' acknowledged Kucinich consultant Steve Cobble, who argued that the party's fractious left has rarely consolidated around any candidate, especially this early. Judged on the issues alone, Kucinich can convincingly lay claim to being the most authentic progressive standard-bearer in the race. Besides his hallmark opposition to the war, the PATRIOT Act and continued U.S. presence and military spending in Iraq, Kucinich has argued for single-payer universal health insurance, vowed to withdraw from NAFTA and the World Trade Organization, pledged to cut military spending to fund education, and proposed rebuilding the manufacturing sector and using government research to create new high-tech industries. He promises to promote labor unions, break up corporate monopolies, fight privatization of government, and stimulate the economy with new public investment in roads, bridges and new energy systems."

... Kucinich campaign advisor Jeff Cohen, founder of FAIR (Fairness and Accuracy in Reporting) and a TV producer/commentator, insists that many supporters of Dean, Dick Gephardt, John Kerry and others prefer Kucinich but have doubts about his campaign. "If all of these people who are saying Kucinich is best, I like him on the issues, but -- fill in the blank -- if they quit letting the media impose assumptions that might not be true and went out and worked for Kucinich, you'd have a social movement on your hands." Cohen argues that the media, with a bias favoring free-trade policies and a lack of sympathy for the labor and peace movements with which Kucinich identifies, have not taken Kucinich seriously.