mousemusings...multimedia, music, progressive politics, video, web design and general rants
Human beings will be happier - not when they cure cancer or get to Mars or eliminate racial prejudice or flush Lake Erie but when they find ways to inhabit primitive communities again. That's my utopia.
~Kurt Vonnegut
Saturday, June 14, 2003
Your political activities are governed and, in many ways, restricted or limited by Federal law.


When I was in New Mexico I read this and wanted to get back to it as a top action item. I haven't seen a lot about it on the pages I frequent yet. We all remember how important Head Start was when we were kids don't we? Even if you have no kids who benefit, perhaps you recall someone, yourself perhaps, who derived huge benefit from this program. The Bush Administration plans to turn responsibility for the Head Start program over to the states, which Rep. George Miller, D-Calif., the senior Democrat on the House Education and the Workforce Committee said the proposal, if implemented would be âsort of like handing your children over to Michael Jackson.â

"Launched in 1965, Head Start provides healthcare, nutrition and educational services for low-income preschoolers between the ages of three and five. It is run by the Administration for Children and Families within the Health and Human Services Department, but is operated in nearly 70,000 Head Start centers and classrooms across the country."

The Bush administration is warning Head Start centers not to aid a lobbying effort under way to defeat its proposed overhaul of the preschool program for the poor. Federal officials sent a letter May 28 to Head Start centers warning them of the provisions of the Hatch Act, which bars certain political activity.

May 8, 2003 Bush Administration Letter to Head Start Officials (.pdf file)
Which, in part, states: The Head Start Bureau continues to recognize and celebrate the importance of effective two-way communication between staff and parents and sharing of information and materials that empower and support the role of parents in shared decision-making. At the same time, it seems appropriate to again share with you, your staff, governing boards and policy councils and parents, long-standing Federal and Head Start Bureau policy regarding political activities.
Your political activities are governed and, in many ways, restricted or limited by Federal law.
it does not make clear that staff are free to advocate political views during their own time, and with their own resources.

There has been some action related to the warning:

Bush Administration Sued for Attack on 1st Amendment Rights of Head Start Instructors and Parent/Volunteers
The motion for preliminary injunction asks the federal district court to enjoin any action related to a May 8, 2003 letter from a U.S. Department of Health and Human Services (HHS) official warning all local Head Start staff and parent/volunteers of possible civil and criminal penalties if they speak out against an extremely controversial Bush Administration proposal to gut the Head Start program.

There are still faith based hiring discrimination issues:
Bill allows some Head Start schools to base hiring on religion

If you are ready to send a message, Take Action Here! 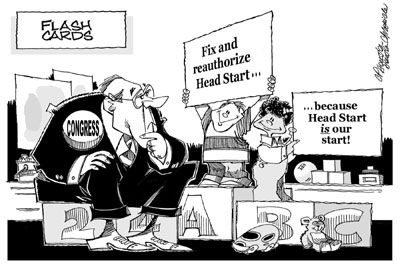