mousemusings...multimedia, music, progressive politics, video, web design and general rants
Human beings will be happier - not when they cure cancer or get to Mars or eliminate racial prejudice or flush Lake Erie but when they find ways to inhabit primitive communities again. That's my utopia.
~Kurt Vonnegut
Sunday, October 06, 2002

Manifest Destiny
The Bush record is a logical extension of what happened in 2000. The theft of that election was not just a power grab â it was a policy statement by someone who has contempt for democracy and the rule of law. The inevitable result is the introduction of the Bush Doctrine. It declares that, while the United States would prefer to behave legally, "We will not hesitate to act alone, if necessary, to exercise our right of self-defense by acting pre-emptively." The Bush Doctrine is the latest incarnation of the Manson Doctrine, which clearly states, âI reserve the right to kill you if I feel like it.â 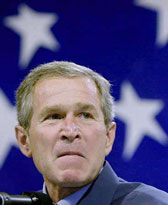