mousemusings...multimedia, music, progressive politics, video, web design and general rants
Human beings will be happier - not when they cure cancer or get to Mars or eliminate racial prejudice or flush Lake Erie but when they find ways to inhabit primitive communities again. That's my utopia.
~Kurt Vonnegut
Sunday, July 30, 2006
Peace Camp in Glorieta 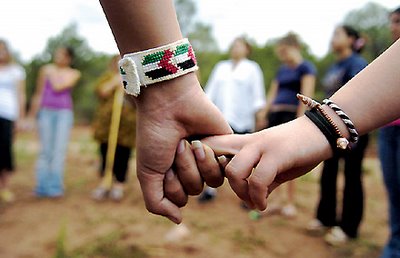 Glorieta, New Mexico, is a former ghost town, southeast of Santa Fe. With a population of fewer than 1,000 people, it rarely is mentioned in the news.

One thing that is revitalizing the town is the active artist community there. Over the past few years, they've hosted the Creativity for Peace camp.

One of the artists who participates, McCreery Jordan, is profiled in a recent article in the Santa Fe Free New Mexican. This year, the experience has been a little different:

Jordan is participating for the second year in the Glorieta-based Creativity for Peace camp, which brings together teenage girls from Israel, the West Bank and Gaza to study peace and how to achieve it. Through guided dialogue, art and fields trips in and around Santa Fe, the program encourages young women of different faiths to come together and develop bonds of trust based on mutual respect and understanding.

The program consists of two consecutive groups of 14 teenagers each, who come to New Mexico for three weeks. Jordan meets with each group twice for the art project: at the first session, she will photograph each girl and talk about photography and the Adobe Photoshop software. Jordan then will print each girl's image on a 12-by-16-inch piece of silk with a board backing. The three-dimensional self-portraits will be assembled on the second visit. The youngsters may add comments or quotes, as well as photos of the other girls on the work, and it's theirs to keep.

This year, open hostilities broke out between Lebanon and Israel, as tension escalated between Israel and Palestinians. Many of the participants became fearful of going home.

This was described in the Albuquerque Sunday Journal (subscription-only)

GLORIETA -- Maya Hochstadter tightly squeezed the hand of her new friend, Raz Ben-Ari, tears streaming down her face, as the girls spoke Wednesday of their fears about returning home to Israel. They both had just completed three weeks in the peaceful confines of Glorieta's Creativity for Peace camp, which each year brings together a mix a Palestinian and Israeli youths...

...For several girls, it was the first time they'd been face-to-face with someone from "the other side."...

...During art classes, intense sessions known as "dialogues" and other camp events, the 12 Palestinian and Israeli girls expressed their fears, spoke of dangers they face at home, and worked to gain each others' trust...

..."The place here is so beautiful," said Fraija after the girls finished the pot, intended as a symbol of peace and reconciliation. "No soldiers. No checkpoints. It's exciting. I feel like I'm dreaming. I don't want to go back."

Podcasts and photos are available, here.

The article described the efforts to engage the girls in discussion of what they could do to promote peace, if they were political leaders.

Perhaps we can be hopeful that some of them will become leaders after they get back. posted by : Joseph j7uy5 | link | | |
Home