mousemusings...multimedia, music, progressive politics, video, web design and general rants
Human beings will be happier - not when they cure cancer or get to Mars or eliminate racial prejudice or flush Lake Erie but when they find ways to inhabit primitive communities again. That's my utopia.
~Kurt Vonnegut
Sunday, April 23, 2006
Plain Truth About Bunker-Buster Nukes

President Bush has let us know that he hears the voices (of the opposition), but unfortunately he gives no indication that he has listened to the voices, or attempted any kind of critical analysis. He has let us know that he is the decider, but he gives no indication of whether his decisions are based upon consideration of both sides (or n sides) of the issue.

There are reasons to think that Bush does not consider issues in their entirety. The conservative-leaning UK paper, The Times, recently commented:

Bushâs Washington still pays far too much heed to some of the wilder propagandists based in think tanks. Increasingly, bodies such as the AEI (for which I once wrote a scholarly volume on British political history) are less keen on sponsoring thinking and research. They are giving desk space and star roles to a breed of fast-talking practitioners of the television soundbite.

We know that he has listened to the folks at the Hoover Institution, which generally advocates the preemptive use of force. From a recent Think Progress post:

This tidbit about President Bushâs schedule was buried in todayâs [4/22/2006]Washington Post:

Bush traveled Friday night to Stanford University, where he met privately with members of the libertarian Hoover Institution to discuss the war. He concluded the day with a private dinner held by George P. Shultz, a Hoover fellow and former secretary of state.
Why is this significant? The Hoover Institution is a think tank that has been aggressively promoting the viability of a preemptive military strike in Iran. Hereâs just a couple of recent examples â

[Europe] will be able to think of all sorts of nicer alternatives to taking out Iranâs nuclear development sites. They will be able to come up with all sorts of abstract arguments and moral equivalence, such as: Other countries have nuclear weapons. Why not Iran? Debating abstract questions is much easier than confronting concrete and often brutal alternatives. The big question is whether we are serious or suicidal. [Creators Syndicate, 1/3/06]
Tod Lindberg, a research fellow at Hoover:


Whatever it is that Saddam was going to perpetrate in his remaining years in power, whatever he intended to bequeath to his sons and whatever in turn they would do to follow up on his legacy, this we have preventedâ¦ Which takes us back to Iranâ¦I donât think it would be a good idea to wait around in the hope that we never arrive at the moment when we realize we should have done something. [Washington Times, 4/18/06]
George P. Schultz, who hosted the event, was an âearly defender of the use of pre-emptive force to deal with Saddam Husseinâs regime in Iraq.â

I can't help but notice that the first quote from a Hoover fellow (Sowell) dismisses the validity of "abstract arguments," while the second quote (Lindberg) presents an abstract argument. Moreover, Lindberg's argument is flawed: since it is always true that another country might someday use force against us, we cannot use the mere possibility as a rationale for use of preemptive force. There has to be some specific threshold. Henry Kissinger explained this in an opinion piece published in the International Herald Tribune:

Pre-emptive strategy involves an inherent dilemma: It is based on assumptions that cannot be proved when they are made. When the scope for action is greatest, knowledge is at a minimum. When knowledge is high, the scope for pre-emption has often disappeared. Had Churchillâs early warning been heeded, the Nazi plague could have been destroyed at relatively little cost. A decade later, tens of millions of dead paid the price for the quest for certainty of the statesmen of the 1930s.

American policy needs to navigate this element of uncertainty. The key question becomes: How is the threat to be defined, and through what institutions can resistance to it be implemented? If each nation claims the right to define its pre-emptive rights for itself, the absence of any rules would spell international chaos, not international order.

To get an idea of the chaos that could come from premature unilateral action, consider the possible outcomes that could occur if the US were to use nuclear weapons against Iran. There are two issue to consider. One issue is the direct effect of the use of a nuclear bunker-buster bomb. Another is the implication of the use of such a weapon with regard to international relations. 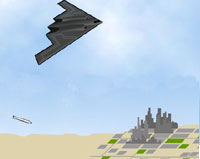 The Union of Concerned Scientists has prepared some information on the subject. The article explains the widespread destructive effects of the weapons. They point out that it is widely believed that earth-penetrating nuclear weapons result in an explosion that is contained underground. This is not the case.

The depth at which even a small nuclear weapon must be buried to ensure that it is "contained" âthat is, that no radiation is released when it explodesâis much greater than the achievable penetration depth, so that it is impossible to prevent radioactive fallout from a nuclear EPW.

They illustrate the point with an example:

For example, the new nuclear earth penetrator that the United States plans to research would use a 1.2-megaton weapon. According to a simulation using software developed for the Pentagon, if one of these weapons were used against the underground nuclear facility in Esfahan, Iran, 3 million people would be killed by radiation within 2 weeks of the explosion, and 35 million people in Afghanistan, Pakistan and India would be exposed to increased levels of cancer-causing radiation.

The article containing these quotes is here. For those who don't have the patience to read a fairly technical article on the subject, the UCS has prepared a short animation (using Flash video) that covers the key points. The article also contains a discussion of the deleterious effect that the use of a nuclear weapon would have on international relations. They argue that our security situation would be worsened by the use of a nuclear weapon against Iran.

Instead, this new U.S. policy conveys a clear message to the 182 non-nuclear weapon states that the United States is moving strongly away from disarmament, and is in fact prepared to use nuclear weapons against non-nuclear adversaries. It provides a strong incentive for countries to abandon the NPT and pursue nuclear weapons themselves and dramatically increases the risk of nuclear proliferation, and ultimately the risk that regional conflicts will explode into all-out nuclear war, with the potential to destroy our civilization.

The rationale for the petition is described here, at Globalsecurity.org.

If President Bush is ever to gain some semblance of credibility on matters of national security and foreign policy, he is gong to have to show that he not only hears the voice of opposition, but that he listens and understands. If he understood the UCS objections to the use of a nuclear bunker-buster, he would not have decided to leave that option open. So far, there is no indication that he is even aware of the arguments against his policy of preemptive force. Until he can present some facts that underlie a cogent counterargument to the position taken by the scientific community, he needs to stop being the decider, and start being the listener. posted by : Joseph j7uy5 | link | | |
Home