mousemusings...multimedia, music, progressive politics, video, web design and general rants
Human beings will be happier - not when they cure cancer or get to Mars or eliminate racial prejudice or flush Lake Erie but when they find ways to inhabit primitive communities again. That's my utopia.
~Kurt Vonnegut
Sunday, January 15, 2006
Impeachment Update

Cyndy showed me some links today, but she is at work, so I will write this up for her.

The regular media continue to miss the ongoing story of the rising tide of calls for censure, investigation, and ultimate impeachment of the President. There is a site called Afterdowningstreet.org, which is now subtitled Censurebush.org, and which has a companion site, Impeachpac.org. They are carrying a post by David Swanson that outlines the current status of the efforts for investigation, censure, and impeachment.

By a margin of 52% to 43%, Americans want Congress to consider impeaching President Bush if he wiretapped American citizens without a judge's approval, according to a new poll commissioned by AfterDowningStreet.org, a grassroots coalition that supports a Congressional investigation of President Bush's decision to invade Iraq in 2003. [...]

To be fair, there has been some activity in Congress. To mention this is fair to Congress, not the media, who are really missing the boat here (although some articles have been trickling out, such as this one and this one). We've been to quite a few political rallies and meetings in the past several months, and impeachment has been mentioned at all of them. In fact, back at the Town Hall meeting that Conyers had last summer, the crowd (several hundred people, standing-room only) erupted with applause. And that was only in the context of the Valerie Plame story. It was well before the more recent -- and more damaging -- news items.

The following graph shows the blogbuzz about impeachment. The August-September spike was in response to Katrina; the October-November hump was generated by the Libby indictment, and the December spike followed the revelation of the NSA domestic spying program. Of course, there is a constant background hum because of Iraq, and now the DeLay and Ambramoff scandals. It seems likely that more indictments will follow. Also, the Republican congressional efforts to clean up the lobbying mess will be seen as halfhearted and ineffective. All of these factors increase the drumbeat for investigation, censure, and impeachment; several of them simultaneously diminish the ability of the House Republicans to offer a deus ex machina (??? ??????? ????) rescue. 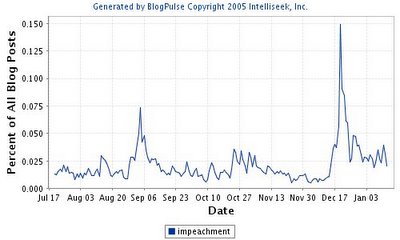 Congressman John Conyers (D-MI) has introduced bills calling for investigation into offenses that could provide grounds for impeachment, and has introduced bills calling for censure of Cheney and Bush. Conyers has not introduced articles of impeachment, simply because of his belief that there should be a formal investigation first. His views can be heard in an interview he did on the Jack Lessenberry Show. (Listen to the mp3 or Real Audio and/or read Lessenberry's essay on the subject). Conyer's own posts on the subject can be found at Conyersblog.us. He's written several, and undoubtedly will write more, so I am not going to link to the individual posts.

Of equal importance, Sen. Arlen Specter (R-PA), has stated publicly that impeachment is not out of the question:

STEPHANOPOULOS: You know, if the president did break the law or circumvent the law, whatâs the remedy?

SPECTER: Well, the remedy could be a variety of things. A president â and Iâm not suggesting remotely that thereâs any basis, but youâre asking, really, theory, whatâs the remedy? Impeachment is a remedy. After impeachment, you could have a criminal prosecution, but the principal remedy, George, under our society is to pay a political price.

I would not try to cast that as a call for the President's head on a pike, but it does seem to imply that the President cannot sanguinely assume that all of the Republicans in Congress will stand by him no matter what. Not only that, but it is possible that the Republicans will lose control of the House later this year.

Bush is quite merrily digging himself into a deep hole, and if he continues to dig, there might not be anyone left to come around and pull him out of it. posted by : Joseph j7uy5 | link | | |
Home