mousemusings...multimedia, music, progressive politics, video, web design and general rants
Human beings will be happier - not when they cure cancer or get to Mars or eliminate racial prejudice or flush Lake Erie but when they find ways to inhabit primitive communities again. That's my utopia.
~Kurt Vonnegut
Sunday, October 30, 2005
Stories Etched in Sandstone

A unique view of Chaco Canyon taken by 'kite aerial photography'.
The sandstone buildings of Pueblo Bonito at Chaco Canyon in New Mexico were inhabited by the Anasazi, or Ancient Ones, or Ancient Puebloans from about A.D. 800 to 1300, with the peak of development between A.D. 900 and 1100. The buildings were an early example of what we now call 'passive solar', oriented to the warmth of the southern sun and nestled against a south-facing mesa wall. Traditions of the Sun and survival.

The Thermal Infrared Multispectral Scanner (TIMS) was flown by NASA over Chaco Canyon for the first time in spring of 1982. TIMS measures temperature differences near the ground, it has five meter resolution. Prehistoric roads from 900 or 1000 AD were detected. The roads could not be discerned by the naked eye from ground level. They also could not be seen in either aerial photography or color infrared photographs. Three more flights over Chaco detected over 200 miles of a prehistoric roadway system, as well as prehistoric walls, buildings, and agricultural fields. It may be that Chaco Canyon was a social and religious center. People were coming exchanging ideas, practicing ritualistic activities, such as breaking pottery, and then returning to whence they came.

Why were the Chaco roads designed with exacting linearity, which surmounted any topographic obstruction, built to a width of 20 feet or more, and constructed by people who did not even employ beast of burden in their lives? 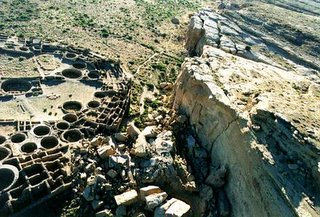 Why did the Anasazi civilization fall? posted by Cyndy | link | | |
Home