mousemusings...multimedia, music, progressive politics, video, web design and general rants
Human beings will be happier - not when they cure cancer or get to Mars or eliminate racial prejudice or flush Lake Erie but when they find ways to inhabit primitive communities again. That's my utopia.
~Kurt Vonnegut
Tuesday, September 06, 2005
Meanwhile, back home, before the news...

Ladies and Gentlemen...Mr. Leonard Cohen a 40 year old documentary of Leonard Cohen and his poetry in particular, was filmed in Montreal and was the perfect way for me to begin my escapade into Montreal and the Film Festival. The film was paired with This Beggar's Description which took me to the depths of understanding and the wonder of encountering one of Montreal's most eccentric street people. (and there were many)

On the Schizophrenia Daily News Blog I found a short review from the Montreal Gazette with a sentence from Phil, the man whose story was featured, "I realize that I'm exposing myself to the world, but in the process I've purged myself from so much that I have been hiding all these years." 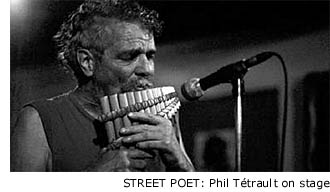 His struggles and the struggles of his family was documented with loving care by his brother, the director. Phil had been heavily influenced by Leonard Cohen and I was struck by the brilliance of his poetry and similarities with Cohen. I'm left sadly pondering how such deep brilliance will swallow one person and lift another. The scene of Phil and Leonard Cohen sitting together on a park bench, bottles tipped, one filled with tomato juice and the other filled with beer, demonstrates humorously what a small line it is that separates the two.

The Montreal Mirror has a summary of a few of the films I saw, including Neil, which had a far more twisted plot than the initial film description led me to believe. I was expecting it to be good, but I wasn't expecting conspiracy, shady government plots, astral projection, and a underlying love thread. Now I expect to see this film featured at the Michigan Theater.

Naked is also a film that simply must hit the US.

Disrobe for dissent, calendars for causes, nudes against nukes. A new phenomenon with old roots is gaining momentum -- busting out, peeling off, and hanging loose, all around the globe. From Europe to Australia, people of all ages are stripping off their clothes to send messages via the media. Naked documents the increasing use of nudity to affirm their values, to fight for their beliefs, or simply to protest others, From anti-war protestors in California to nudist cyclists in North Carolina and breast cancer survivors in Calgary, Naked reveals the political reasons beneath the very personal act of taking it all off.

I spoke with the director Mary Bissell after the film and she was concerned the nudity in it was too much for the US. I don't think that concern is warranted and I hope Ann Arbor Film Festival will welcome the documentary because the message is important. The "Calendars for Cancer" segment, featuring women who were fighting breast cancer, tastefully baring their bodies, made me cry. Nudity attracts attention. Attention is what dissent aims for. Awareness doesn't just happen without attention.

The film Greenhouse Effect reminded me of myself as a teen, though I didn't know anyone as young, sweet and caring as Mute. The story made me realize that things are always and never changing.

This trip was the pinnacle of a class I took. Now, to finalize it, I have to write reviews. The other films I saw are below, much for my own reference and reminders.

Still Life
Carjacking
Coca: The Dove from Chechyna
To Die in San Hilario
Looking for the Lost Voice
On That Day posted by Cyndy | link | | |
Home