mousemusings...multimedia, music, progressive politics, video, web design and general rants
Human beings will be happier - not when they cure cancer or get to Mars or eliminate racial prejudice or flush Lake Erie but when they find ways to inhabit primitive communities again. That's my utopia.
~Kurt Vonnegut
Tuesday, July 12, 2005
Patti Smith given French honour

US punk rock star Patti Smith has received one of France's top cultural honours in recognition of her influence on rock music.

...) Smith, 58, was presented with the Commander of the Order of the Arts and Letters by Culture Minister Renaud Donnedieu de Vabres.

Her appreciation of 19th Century French poet Arthur Rimbaud was also noted in the citation. [ more ]

Patti Smith's poem to Rimbaud off the album "Sahara Blue" 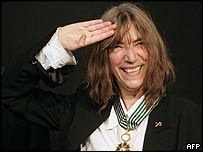 Excerpt from "Rimbaud and Patti Smith: Style as Social Deviance"

The fact that [Patti] Smith chose to focus her largely successful 1978 album Easter on Rimbaud points first to the great appeal of his myth; Rimbaud, the countercultural rebel, provided young musicians of the seventies with a persuasive model of antisocial innocence. However, Smith's multiple allusions to Rimbaud's text-- her appropriation of precise features of his style-- suggest thtat there was something she found nourishing in the poetry itself. The case of the punk reception of Rimbaud (a reception that occurred primarily through the mediation of Smith) demonstrates that it was the linguistic strategies we associate with the lyric genre-- and not simply the myth of the French voyou (hooligan, punk)-- that inspired the work of both punk musicians and their avant-garde predecessors, the dadaists of the late teens and the situationists of the sixties.

...) Guy Debord and Gil J. Wolman maintained that the "discoveries of modern poetry" could provide a blueprint for countercultural activity, especially, if not exclusively, in arenas traditionally foreign to high culture.[ more ]