mousemusings...multimedia, music, progressive politics, video, web design and general rants
Human beings will be happier - not when they cure cancer or get to Mars or eliminate racial prejudice or flush Lake Erie but when they find ways to inhabit primitive communities again. That's my utopia.
~Kurt Vonnegut
Saturday, August 28, 2004
Fragments

My camera has the ability to stitch together fragments, but if you look closely, artifacts of the seams still exist.
All I have from the last couple weeks are fragments. My internal stitch mechanism is still on vacation, the thread elusive, never to be transparent. Although I was away from my job, this was hardly a vacation, but it did afford me a perspective of peeking into a different window rather than looking out at familiarity.
As detached as possible, yet always probing the political pulse, the fragments:

When my shuttle driver Richard picked me up he noticed my Kucinich bumper sticker. That was a jumpstart to stimulating conversation all the way to the airport. He had worked with the Government of Fiji, developing an alternative energy program and was deeply concerned with direction the US is headed. He was also exploring the mindset of the conservative and I recommended Lakoff's Moral Politics, which was new to him. He didn't think my dream of living in a yurt was crazy. I think we were both encouraged, at least for awhile.

waiting for my plane I noticed many of the male ticket agents wearing tacky American flag neckties. In a more conservative time wasn't that considered unlawful desecretion of the flag?

On the flight, I'm thanking Nader. "Pretzels," he said, "just don't do it." Wow, peanuts and a decent sized bag of Wheat Thins!

Boy, this one cost me!
Just $60 per day, no drop fees and free mileage of 500 miles per day and $.12 each additional mile. Choose any car from an economy through premium including minivans and PT Cruisers, all same price of $60/day.
How did I know that I wasn't going to get the advertised PT Cruiser that I reserved? "Sorry ma'am we only have a Sebring left." Never, ever, rent a car one-way! How the hell did $60 become $132 for a 24 hour rental? Advantage took advantage.

Mouth still gaping from the ripping for the rental car, I took off on the road trip from Albuquerque to Las Cruces. This drive IS my vacation I remind myself. I really can't afford a room now (damn car!). I'm thirsty, hungry and it's dark. The billboards advertise rooms for $32 in Socorro. It's not a terrible room, the carpet is grungy, there's a cricket on the bed, a persistent fly buzzing my ears and the toilet doesn't seem to be bolted to the floor but I had already paid for it. I settled in with a diet cherry limeade and a green chile cheeseburger from Sonic Drive In, my very first place of employment as a cook and carhop, whohooo!

Nostalgic cheeseburgers taste pretty good. The TV is inundated with political ads. This is, afterall, New Mexico, battleground state, and I appear to be in the center of Bush-Cheney country judging from the campaign headquarters I saw when driving into town.

Trying to put myself into the seat of someone open to political advertising, as one who only gets my information from the television, I was quite impressed with the Michael Badnarik ads. Please take the time to watch one for yourself. I believe he is going to be quite a factor in the New Mexico election. He could quite feasibly attract both conservative and liberal voters. His peace candidate ad quite readily distinguishes him from Bush or Kerry and he's already polling at 5% due to aggressive advertising in NM.

I wanted to take the time to visit the VLA. Ah...maybe another time.

Back on the road. Why can't I find a decent radio station? I feel like I'm in a timewarp. All the songs are the same songs I grew up hearing, classic rock, country, heavy metal. Seriously. I don't think they get promos. The car has a CD player. My new Wilco CD would have been great for this drive, sigh. At least I can read the book when I get there.

The further down the road I go, the worse the radio gets. I don't recall it ever being this bad. Every station is punctuating all interaction with Bible verses!
Yes, I'm in a rural area, but even when I lived in the South Carolina Bible Belt I was never subjected to this! With the serenity of the mountains and the innate spirituality that glistens in the sunlight paired with the inborn simple connectedness that can't be denied in a desert environment, the point needs no dilution nor delusions.

Once I reach Las Cruces I know my vacation is over. I stop by Mountain View Market to pick up some green chiles

(it's harvest time and these are the very best chiles in the world) I also learned of Organic Agriculture Students Inspiring Sustainability which I'm filing here for reference if needed.
Now I have to drop off my only semblance of freedom, the car.

I'm here because my dad needs help with my mother. She's in the early to mid stages of Alzheimers and has extensive mobility problems. Assisted living is very expensive, and, like the majority of people, my parents don't have insurance to cover such care. I'll assess the situation, live a couple weeks in the prison that my father's been captive of and make plans accordingly. That's the plan anyway.

The fragments of thought really kick in now.

My dad is the closest person to sainthood that I know.
My mom is the most selfish, hateful person that I know. Alzheimers tends to exacerbate those traits, at least in her case.
Sometimes I'm very thankful that I was adopted and don't share her genes.

My dad has rheumatoid arthritis and the physical demands of my mother are becoming too much for him.
He wants me to move there.
My dad is the closest person to sainthood that I know.
He deserves all the help he can get.
If I move there I won't have a job.
Taking care of my mom will be a fulltime job, without pay.
I'll forfeit my healthcare, my dental, my social security and retirement contributions and that scares the hell outta me!
I love New Mexico, the sun and the mountains.
I'm avoiding being home as it is because I have a new neighbor who gives me the creeps.
Alzheimers can drag on for a long time. Can I do it without going insane? I have a lot of patience but my mom has a way of wearing it thin after about 4 days.

I want to go home. I just don't know where it is.
I can't find a decent radio station. The Bible verses are everywhere. NPR isn't.
Dialup internet is only good for retrieving email long enough to delete the spam, especially on a 90 mhz pentium with Win 95. Oh man!

Watching The Price is Right, followed by hours of HGTV and then Wheel of Fortune with my mom is about the most horrible way to spend time that I can think of at the moment, unless I want to think of the evening I wrangled the TV away long enough to watch a few elusive screens of NOW with Bill Moyers before she threw a tantrum.

My parents, being older and needing fewer calories, eat one meal a day. Not that it's a bad thing, but I've lost 10 lbs.

There is no room in their house that I can escape to and close a door. It's a beautiful open floor plan that works well for two people. Did I mention no bathtub? When all else fails a bathtub is my sanctuary. How do I shave my legs?

On the first Saturday I was able to steal away time and a car so I could visit the Farmers Market and pick up some more chiles. A 1-1/2 hour of reaquaintance with the town I grew up in followed by another week of assessing the situation, trying to help my father find better, less physical ways of helping my mom, and listening to far too many childish temper tantrums. Even my kids at their worst were never this loud and certainly not hateful. I can almost feel sympathy for her but I feel more awe that my father can take it in stride.

It rained while I was there! After 6 years of drought they got almost a half years average rainfall in two days.

If you look just beyond the yucca in the picture you can see an overflowing arroyo. Another of my apprehensions about moving here has been wrapped in the water situation. Rain eased those fears somewhat. It was funny to hear the people complain about the rain, as if! It did do some flooding, and was considered a 100 year rainfall but I have very little sympathy for people who bulit their fancy homes in an arroyo runoff area.

On the second Saturday I stole away more time to return to the Farmers Market to buy 5 lbs of chile to bring home with me. I also stopped to pick up some honey. Red chile honey! Imagine. Recipies online. Sweet heat! Yes, I do mean heat. Yum.
At the honey table I overheard people talking about the upcoming Bush visit to the area Thursday. Kurt Nimmo writes some about the visit too. It was good to hear someone planning a protest as my initial impressions made me very wary of the area, although I did see many Kerry bumper stickers and no Bush stickers. They invited me to join the protest but I was to be back in Michigan by then. It was quite interesting to find that they had both spent time in Ann Arbor. Suddenly I felt much more at home than I had for the past two weeks.
I mentioned the honey to my dad when I returned and he told me the beekeepers who sold the honey were also quite liberal and had written quite often for the local paper and he added that his next door neighbor often went to protests with them. My curiousity piqued, I searched for more info. Ok. If he can write this and this and his wife can write this, not to mention their research into alternative homebuilding, which is fascinating, perhaps I can be somewhat comfortable living there. At least I know it isn't entirely a Bush mecca.

Fragments again, and the thread still isn't in sight.
How soon?
How long?
Do I have it in me?
Health care and retirement, ouch!
I miss Craig.
Andy's going on vacation.
Tony's missing.
This is my decision.
My dad is the closest person to sainthood that I know.

A delicate flower can grow in a bed of thorns. 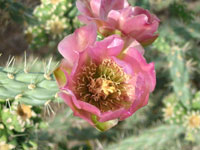 Thanks for keeping the blog active Andy! If you find time while you're away, by all means, go for it! This must be the longest 'hello' I've ever written on this page.
I have a bathtub. I think I'll go there now.
Please scroll down to read some good info that Andy posted about the NYC scene just before I bogarted the page. It will be a long time before I ever write this much again, I promise.