mousemusings...multimedia, music, progressive politics, video, web design and general rants
Human beings will be happier - not when they cure cancer or get to Mars or eliminate racial prejudice or flush Lake Erie but when they find ways to inhabit primitive communities again. That's my utopia.
~Kurt Vonnegut
Saturday, July 24, 2004
Impermanence

Last year at this time Craig and I were at the art fair sitting in the Kucinich booth.
He was just beginning his new chemo protocol, was newly bald and his voice was rough from his paralyzed vocal chord. He actually surprised me by showing up at the booth. I knew he wasn't feeling well. After my time frame was finished, he humored me in his exhausted state by accompanying me to my favorite Indian food booth near Old Towne where we could also listen to some local music. I remember sitting there two years prior when he was just a couple months out of surgery. It was a tough trip that year because just walking one block was almost more than his body could bear. It was also the push he needed to realize he could recover.

I fully intended to make the best of it this year, take some pictures, listen to some music and eat Indian food. I spent some time in the non-profit area, signed the IRV petition at the Greens booth, noticed something humorous, made a mental note and decided to check it again later. 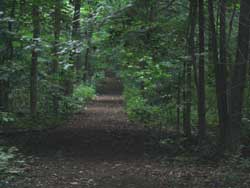 I wandered amongst the art pondering permanence and impermanence. The delusion of permanence; the ritual of going to the art fair year after year, seeing the same artists with the same art in the same location for some reason wasn't at all comforting to me this year. There was no Craig and no Kucinich booth. As of this evening there wasn't even going to be a Rubber Soul Records. I didn't feel like taking pictures, people were too close and I needed space. I headed to the woods instead but not before checking again at the non-profit booths just to see if I had room to laugh again.

I couldn't bring myself to go to RubberSoul's closing party last night. I love those guys and I have a lot of good memories. I just don't know how to deal with another piece of my life missing. I was afraid my emotions were too on edge. I need to figure out something soon to let them know how special they were to me and to the community. I'm so sorry they couldn't make it work.

Today is the last day of the art fair. 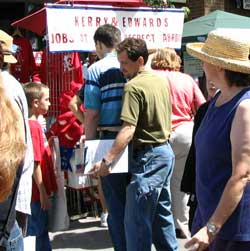 I gave up on getting any art pictures, or even any of the crowds, but I did want to go back for one more laugh. I also had to get one more plate of food from the Indian food booth.
It really isn't hard to make me laugh. After seeing this 3 times I know it isn't an aberration and my smiles are indeed warranted.
Notice the picture on the right. It's a Kerry booth. I stopped by to get a bumpersticker to put next to my Kucinich sticker, and they had run completely out. See the people lining up? There seems to be quite a bit of interest. I'm not thrilled with the Democratic platform nor Kerry's position on Iraq but a picture like this means we're getting a little closer to the Kucinich vision.

Compare to the lonely picture here.

In this case impermanence doesn't even phase me.
posted by Cyndy | link | | |
Home