mousemusings...multimedia, music, progressive politics, video, web design and general rants
Human beings will be happier - not when they cure cancer or get to Mars or eliminate racial prejudice or flush Lake Erie but when they find ways to inhabit primitive communities again. That's my utopia.
~Kurt Vonnegut
Thursday, March 25, 2004
Personal Observation

I've noticed an onslaught of media photos portraying Condi Rice as wicked, mean-spirited and especially evil lately. My guess is that she's on the way out soon. 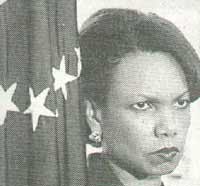 Maybe the others won't be far behind especially after reading this:

FBI translator Sibel Edmonds was offered a substantial raise and a full time job to encourage her not to go public that she had been asked by the Department of Justice (DOJ) to retranslate and adjust the translations of [terrorist] subject intercepts that had been received before September 11, 2001 by the FBI and CIA.